On 21st March, the Maxwell Quartet were delighted to make our debut at the Wigmore Hall. Park Lane Group promoted the concert and we were performing alongside Marta Kowalczyk and Somi Kim also recipients of the Park Lane Group Young Artist award. It was a fantastic feeling to be on stage in one of the worlds best acoustics playing such enjoyable music. 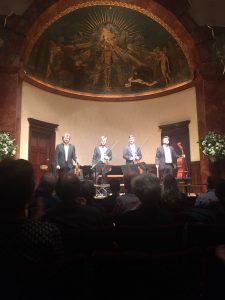 Maxwell Quartet at the Wigmore Hall

We started the concert with Stravinskys Trois pièces pour quatuor à corde (Three pieces for string quartet). A quirky set of very short character pieces, they make a fun start to any program. The first based on four layers that operate independently of each other. The parts each have a distinct flavour and the phrase length for each player is different. The second is based on a celebrity clown of the time- Little Titch, who performed comedic tricks and acrobatics. Pre-dating our current standards of political correctness, Stravinsky was fascinated by his spasmodic movements and uneven walk and the piece captures this with flair and humour. From the lopsided rhythm at the start interrupted by the occasional trick, to the genuine acrobatics in the viola part when I have to quickly take my viola from under my chin and place it on my knee like a cello to perform three loud pizzicato notes, only to fling the instrument back to my shoulder in (barely enough) time for the next entry. The last movement is said to depict Paris at night. It uses interesting colours created by using a flautando bow stroke (very fast speed of bow with minimal weight on the string) giving it a distant and translucent quality.

We ended the concert with Beethoven’s Op.127 in eflat major. The first of his ‘late quartets’ and possibly the most generous and accessible of all of them it is a total joy to play. The opening chords- a complete celebration of the richness of eflat major were enhanced by the wonderful acoustics of the Wigmore. We will be performing the same program throughout the year. Click on the LINK to see the Maxwell Quartet schedule..

We will be performing the Stravinsky, alongside Mozart and Brahms Quartets at the National Gallery on Friday 19th August at 6.30, also promoted by PLG. Click HERE for more information.