Home » News and Views » Violist at large » Why MULTI-STORY?

I arrived for the first rehearsal in the venue and it ACTUALLY was a multi-story car park. I should have guessed as the name tells you quite a lot but in my classically-conditioned brain I had to see it to understand. The car park is unaltered with the exception of a few pallets to raise the wind and brass up a foot so they can see. As the rehearsals progressed I began to pick up the atmosphere of the place. Yes it is grubby, yes the rehearsals are punctuated by passing trains and yes…. it works. Fueled by the passionate belief of Kate Whitley and Conductor, Christopher Stark, this project has a unique energy and drive that is infectious to both the orchestral members and audience alike. This was proven by the commitment of the players and a sell-out crowd of 700 people (to give a comparison, the Wigmore Hall holds 545 at capacity). 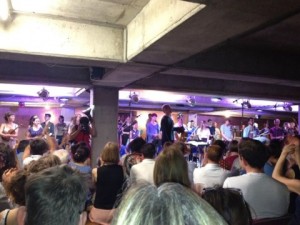 Matthew Barley was great to work with. It is always a tough job to play such a well known piece but he nailed it. He also captured the mood of the event perfectly and brought his idea “Living Program Notes” to the car park.

In a meeting last week with Matthew, he explained to the group his dissatisfaction with the current presentation of program notes at Classical music concerts. The format at present consists of

a) Person reads paragraph on paper about piece

I wholeheartedly agree with Matthew- this is a dull format. MULTI-STORY to the rescue:

The Orchestra was split into smaller groups ranging from individual “roaming” players to groups of about 10 players. The groups were each given a specific aspect of the piece to look at. e.g. the overall structure, the cadenza, sarabande in the second movement etc. We were spread out across two floors of the car park and each had a role similar to museum videos, looping an 8-10 minute presentation. My group was a string quintet + 1 designated speaker and we were set the task of exploring the thematic material of the first movement. The emphasis was on interactivity with the punters and they seemed to be very engaged with each presentation. 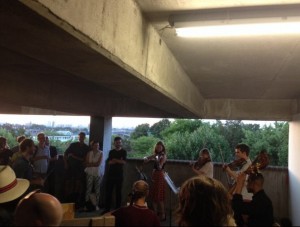 One of our aims was to illustrate how Schostakovich came up with the DSCH musical motif. We changed audience member’s names into replaceable signatures and inserted them into the opening passage of Schostakovich’s 8th string quartet. To explain:

Sasha: My name is Sasha.

Me: Great- lets make that Sash, which (using the German notation) is Eflat – A – Eflat – B and stick that into the quartet to make Sash’s 8th string quartet.

*Quartet (+Bass) Plays to demonstrate using SASH instead of DSCH*

This was the general tone that we tried to set and I thought it was an absolute joy to see the public listening, engaging and laughing with us. It was at this point I realised what Mathew Barley was trying to achieve- to bridge the audience/performer gap that is so firmly rooted in classical performing tradition. Matthew and MULTI-STORY had orchestrated nothing short of chaos and it was thrilling to be a part of.

MULTI-STORY is the most exciting thing going on in South London and has succeeded, where others have awkwardly floundered in accomplishing what countless schemes have failed to do. Classical musicians should watch and learn as I have never seen such a large audience (consisting of mainly 20-40 year-olds) attend a classical music concert. I am full of admiration for the project and I look forward to seeing what they come up with next. 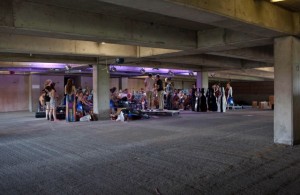 Rehearsing for the Concerto 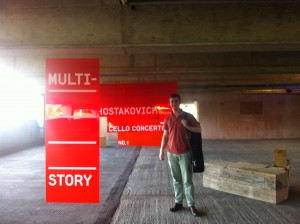