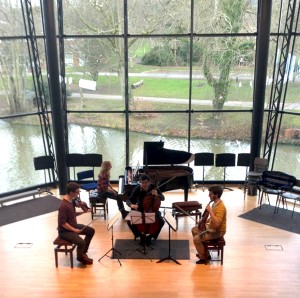 The Perks Ensemble is a vibrant and flexible chamber ensemble, formed in 2012 by brothers Oscar and Elliott Perks and their sister, Ursula. They have performed widely around the UK and have developed a reputation for their energetic and committed performances, playing their own arrangements of other composers alongside the great chamber music classics. In June The Perks Ensemble collaborated with Shadwell Opera for a critically acclaimed and powerful rendition of Philip Glass’ “In the Penal Colony” in the west end.

Appearances this last summer will included the Sainte-Mère festival in France, and the Ashdown music festival in Sussex.

Oscar Perks enjoys a varied performing career playing both violin and viola. He is the second violinist of the Dante Quartet, works as an assistant violin teacher at the Yehudi Menuhin School and also pursues an interest in composing and arranging. Having started playing the violin at the age of five, Oscar was awarded a place to study at the Yehudi Menuhin School three years later where he had violin lessons with Hu Kun and Simon Fischer. Oscar went on to read music at Gonville and Caius College, Cambridge, where he studied composition with Robin Holloway. During his time at Cambridge, Oscar performed the Mendelssohn and Tchaikovsky violin concertos with the University Music Society, led the University Chamber Orchestra and was also invited to perform alongside the Endellion String Quartet as a second violist in concerts at West Road concert hall. He gained his masters with distinction at the Royal College, where he studied with Lutsia Ibragimova.

Oscar has performed at many leading London venues such as the Wigmore Hall, Barbican, Royal Festival Hall and Kings Place; and has also performed live on radio three. He is regularly visits IMS Prussia cove open chamber music and took part on Prussia cove autumn tour of England last year. His composition for string quartet The Twin Towers (2001) also won the BBC guardian young composer competition and was premiered at the Wigmore Hall. Oscar is also a founding member of The Perks Ensemble, a flexible chamber group he co-founded along with his brother and sister.

Born in Edinburgh in 1991, Colin Scobie is already established as one of the most creative and compelling violinists and chamber musicians of his generation. He has performed as concerto soloist  to critical acclaim across Europe and further afield, with orchestras including Musica Alta Ripa, the Orchestra of the Age of Enlightenment, La Serenissima and the Covent Garden Chamber Orchestra. He has broadcast for BBC Radio 3 and Radio Scotland numerous times and collaborated with many eminent musicians including Marcia Crayford, Stephen Orton, Martino Tirimo, Moray Welsh, Colin Carr, and Alexander Hohenthal.

In 2010 Colin was appointed 2nd violin of the Fitzwilliam Quartet with whom he performed extensively for 2 years, touring Europe, Africa and America. His desire to explore the possibilities of the quartet repertoire and to lead a young and dynamic quartet led to him joining the Maxwell Quartet as first violin in 2013.

Colin began playing the violin at the age of eight, studying at St Mary’s Music School, Edinburgh, before going on to the Royal College of Music in London, studying with Dona Lee Croft.

Chaim Steller, Born in 1983 in Amsterdam, started playing the violin age 4 but switched to the viola when he was 16. He studied at the Conservatory of Amsterdam with Marjolein Dispa and continued his studies with Wolfram Christ in Freiburg, where he obtained his “soloist”-diploma with the highest honours in 2009. In the following two years Chaim studied chamber music in Berlin with the Artemis Quartett. Masterclasses with musicians such as Alfred Brendel, Lars Anders Tomter, Thomas Riebl, Antoine Tamestit and Jörg Widmann continue to complete his musical education.

Chaim Steller has been first principal violist of the Duisburger Philharmoniker since December 2013. Before that he played regularly as principal violist of Orchestra Mozart Bologna under maestro Claudio Abbado, as well as with other well-known conductors such as Trevor Pinnock, Oliver Knussen and Pascal Rophé. By personal invitation of Claudio Abbado, he has been playing in the Lucerne Festival Orchestra since 2008. Along side this, Chaim is regularly invited as guest principal with orchestras such as the Australian Chamber Orchestra, the Stuttgater Kammerorchestra and the NDR Ochestra Hamburg.

Along with American violinist Joseph Puglia and Hungarian cellist Örs Kőszeghy, Chaim founded Trio Dumas: a string trio, as well as 3-man collectif, playing all repertoire from all style periods, for any formation; including string trio, duo and solo. Trio Dumas recorded their first CD for Hungaroton along with clarinetist László Horváth, was awarded the Sándor Veress prize in 2009.

Chaim Steller won prizes at competitions such as the 42nd International Competition for Viola in Markneukirchen (Germany), and the 2nd National Viola Competition in Amsterdam. He was awarded the Gustav Scheck Prize of the Commerzbank in 2008 for achievements as a student of the University of Arts in Freiburg, and the Alice-Samter prize with his string quartet from the University of Arts, Berlin. As a Soloist Chaim played concerts with orchestras in Germany as Italy, such as the Chursaechsische Philharmonie with Florian Merz and the Orchestra Friuli Venezia Giulia with Nicolà Paskowski.

A committed player of 20th century and contemporary music, Chaim participated a number of times in the Lucerne Festival Academy, where he played both in chamber music formations as well as in the orchestra as principal violist under conductors such as Pierre Boulez and Péter Eötvös. He collaborated with composers such as Boulez, Eötvös, and Márton Illés on their pieces, and played premiers of works by Eötvös, Lachenmann, Pintscher and Stockhausen.

Reinoud Ford pursues an exciting portfolio of projects in his music career. He studied with Louise Hopkins at the Yehudi Menuhin School before graduating with First Class Honours from the Guildhall School of Music and Drama (2007), where he also completed a Masters (2009).

Reinoud has achieved significant success as a soloist. While still at the Yehudi Menuhin School, he was selected to perform a C.P.E Bach concerto with orchestra at the Menuhin Festival in Gstaad. As a student at the Guildhall, he won the Guilhermina Suggia Award (2004), the Flame Competition in Paris (2006) and became a finalist in the Royal Over Seas League (2006). Reinoud continues to be in demand as a soloist throughout the UK, Europe and further afield. Recent performance highlights include recitals in the Villa Borghese, Rome (2013) and for the diplomatic community in Doha, Qatar (2011) as well as other concertos with London-based orchestras (Jupiter Chamber Orchestra, Hounslow Symphony Orchestra).

Reinoud has performed from the solo repertoire in the Wigmore Hall, Bridgewater Hall, Dorking Halls and in Schloss Mirabel, Salzburg.

Reinoud also performs as a chamber musician as part of a number of acclaimed ensembles (Brodowski Quartet, Cellophony). At the Guildhall he was awarded a Junior Fellowship in Chamber Music (2010). In chamber competition he has won the Royal Over Seas League (2008) and the Tunnell Trust (2011). In 2011 he was selected as a Park Lane Group Young Artist (2011). Reinoud has performed in important European ensemble venues such the Wigmore Hall, Barbican, Queen Elizabeth Hall and the Purcell Room. He has made numerous chamber music recordings to critical acclaim (Brodowski Quartet on Toccata Classics and Cellophony on Edition Records). As a chamber musician Reinoud has studied under Rainer Schmidt (Hagen Quartet) Gunter Pichler (Alban Berg Quartet) Bernard Greenhouse and Alasdair Tait.

In 2012 Reinoud inaugurated the Ashdown Music Festival, an annual classical music event that brings together celebrated international performers and musicians from his boyhood home county of West Sussex. As Festival Director Reinoud programs ambitious musical projects, such as the world premier of Vivaldi’s Four Seasons arranged for eight cellos and solo violin (2013). Among the 2014 Festival program highlights are British tenor Mark Padmore and a Royal Ballet soloist dancing to a series of original compositions.

Reinoud also pursues a number of successful and unique projects outside the classical music scene. He performs, tours and composes with critically acclaimed singer-songwriter Keaton Henson. In 2014 the duo will release a highly-anticipated album. Reinoud and Keaton are composing the music for a planned production by the internationally-recognised BalletBoyz ensemble (2015). Reinoud finds time to play with UK orchestras and on diverse recordings as a session musician. 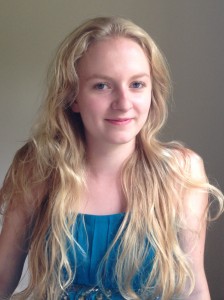 Ursula has given many solo concerts at venues such as Champs Hill, Sussex, The Menuhin Hall, Wells Cathedral, St Theresa’s School, and Epsom Playhouse. In February she took part in a tour of Scotland, including concerts in Blair Atholl and The Royal Overseas League in Edinburgh. She has recently performed Beethoven’s second piano concerto with the London Gala Orchestra. She has had master classes with pianists Piers Lane, Victor Rosenbaum, Ronan O’Hora and Hsing-Chwen Hsin.

Ursula has enjoyed chamber music in many forms. She performs with her brothers, Oscar and Elliott, as a part of The Perks Ensemble as well as participating in chamber music at the school.

She will soon be travelling to Istanbul to perform Chopin’s piano concerto in F minor in its ensemble form before returning to play Debussy’s sonata for violin and piano in the Menuhin Hall as part of a Remembrance Day concert.

The Perks Ensemble in Mickleham